In the main text we have already seen the General Electric engines, or the American Nerva and Pluto projects.

-We now have a Russian project, which came to work on at least 34 flights.

-On top of the fuselage there is a kind of dome necessary to save the height of the reactor core.

"Nuclear reactor on the fuselage"

-It appears that of the four Kuznetsov NK-14A engines that the Tu-95 normally uses, the two interiors were replaced by modified NK-12MVs to operate with the new turboprop heating system.

-Below we see schematically the route of the heat transfer agent from the central reactor to the two internal engines on the wings. 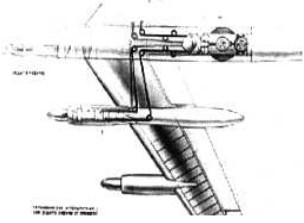 -Several dates are mentioned from 1956 to 1974 for the development and testing of this Russian project.

From Appendix 7: In the main text there are several examples of this type of engine, intended for military aircraft in general, due to their circumstances of contamination, radiation, etc. 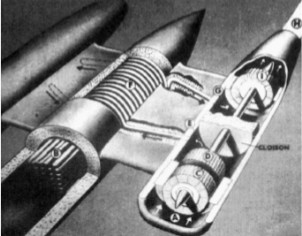 -The proportions are not correct, all the flow delivered by the two compressors LP and HP cannot pass through the ducts so thin that go to the exchanger of the reactor and returns to pass through the turbine. 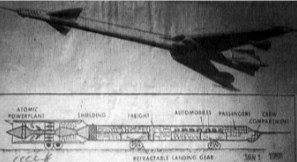 From Appendix 9: I have received information on a nuclear aviation engine that was studied in 1953. It was of the type known as CFR or Circulating Fuel Reactor.

-It was planned to propel B-52 and Convair, subsonic and supersonic bombers.

-It used liquid fuel instead of the well-known solid fuel rods.

“Appearance of the nuclear turbojet system”

-It seems that both GE and PW were involved in addition to ORNL or "Oak Ridge National Lab." Info from Mark (PeT).

-From Daniel Marin's site “Eureka” (see) a nuclear space tug with the following aspect was proposed, the Russian Rosatom project. 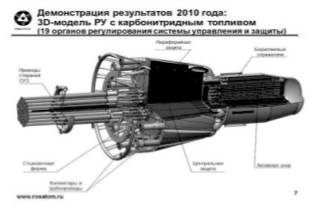 -There is no doubt that perhaps the best known nuclear rocket engine is the Nerva, because it has been built and tested.

“New investigation of a Nerva” (PiP)

-We found an American nuclear engine from 1946. Or rather, a project. 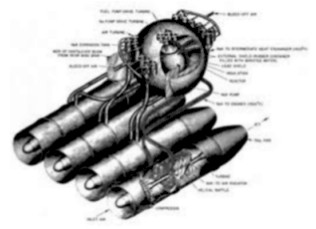 -We located a Nuclear turbine engine from General Electric, to which the reference XNJ-140 E-1 was assigned. It has a very interesting architecture in its central part, which contained the reactor's heat exchanger, but we can also see that there are combustion chambers, possibly for normal operation.

-Below, the nuclear reactor cutaway of the same XNJ-140 E-1 turbojet project. 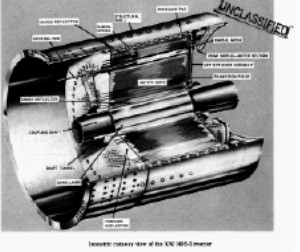 From Appendix 12: Another rescued Russian project. The turbojet is of classic design, compressor-turbine. But the combustion chamber is made up of a heat exchanger and the nuclear reactor. 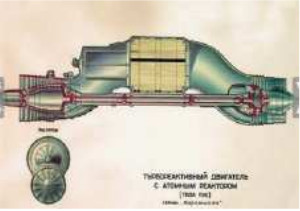 “Side and front view”

-In the center the radiator type exchanger and in front of it the small individual reactor for each engine.