From appendix 6: We are not talking exactly about the formula ramjet rocket that is widespread in small and medium missiles.

-It is a combination of turbo and ramjet, or AirTurbo-Ramjet.

-Exhaust gases are directed to a peripheral fan turbine, which first allows operation at low speed, and then at high speed in ramjet mode.

-The diagram below is a heat exchanger (also called regenerative system).

-The figure is obtained from the Flight Magazine, though the manufacturer is not mentioned.

It is planned for supersonic speeds, being a step beyond the VCE (see) and before the Scramjets.

-In the 1990s, several options have been considered to reach such high speeds, in excess of Mach 6 and above. 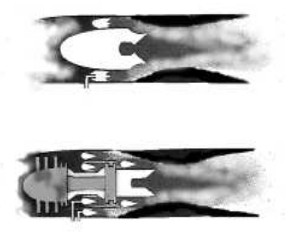 -First we have the ramjet, and below it the turbofan ramjet.

-And now we continue with a rocket that has the air increased with liquid air.

"Rocket that has the air increased with liquid air"