Like in the automotive market, hybrid propulsion is also being studied in aviation.

-But it is not fashionable, for NASA has been submerged for years in constant improvements of propulsive efficiency, either with their own projects or supporting those considered to be interesting outdoors.

-Mixed propulsion of thermal and electric motors is very advanced as we see in the following projects and designs. 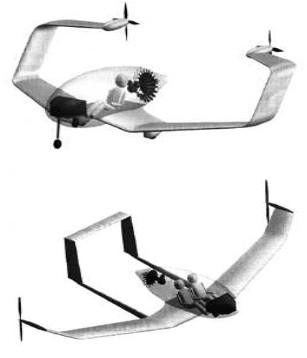 -The combined propulsion of both thermal and electric systems produces a great opportunity for synergies for the different flight stages.

-The placement of electric motors on the marginal edges of the wings acting on takeoff and climbing, rotating in the opposite direction as the "vortex" that originate there, it gives greater thrust at this point to increase propeller efficiency. 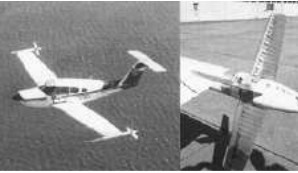 In the pictures above we can see the electric motors and the propellers at the wing ends. They have been used for the mentioned maneuvers, and after that the blades remain in "flag" position.

-In terms of thermal engine housing, there have also been studies on the best propulsive efficiency that could be obtained from the whole. So the fuselage and its resistance against engine traction or thrust has been substantially improved by adopting the "Goldschmied" propulsion shape by thrust under pressure.

-The thermal engine in the fuselage drives a fan that propells air through the tail nozzle. The electric motors are kept at the marginal wing tips.

From Appendix 6: Continuing with this topic, new occurrences of mixed thermal-electric motors have appeared.

-One of the latter is that of ultralight-airplane manufacturer Flight Design GmbH, which in collaboration with Rotax's distributor in Germany, Franz Aircraft Engines, has prepared a Rotax 912 engine with a belt-coupled electric motor on top of it through the gearbox output.

-We see it below: 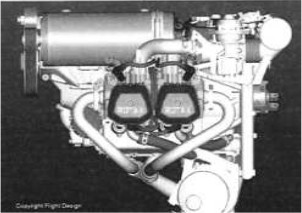 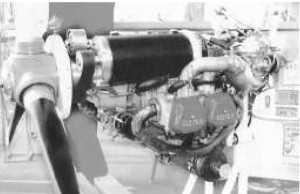 "Realization of the hybrid engine"

-The hybrid engine that is presented at an exhibition by Flight Design for the VLA MC model (from Metal Concept) has a Rotax 914 with an electric motor on top as described above.

-Both intervene in the different flight stages, individually or jointly.

-As hybrid engines are presented as engines that combine two or more propulsion types,  but not including those of "compound" engines.

-A turbo-rocket engine is presented as hybrid at the U.S. Patent Office with number 5014508, which we show below in a rather poor image. 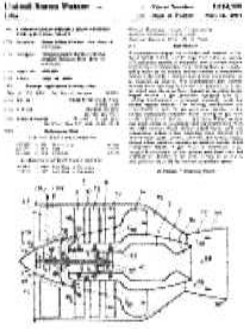 -We see the chamber in the center and a front turbine drives the turbojet fan. It can be used for sub and supersonic speeds.

-In fact they are normal pulsejets with and without valves but for combustion both the fuel and the oxidizer are provided. 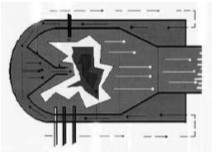 "Hybrids without and with valves"

-In the upper part there is the igniter, and in the lower part the ducts for the rocket fuel/oxidizer, and in white a compressed air inlet for starting.

-In fact it is a normal pulsorreactor "favored" or assisted by the entry of oxygen or oxidizer perhaps for operation at higher altitudes. The cycle is similar, if not the same. 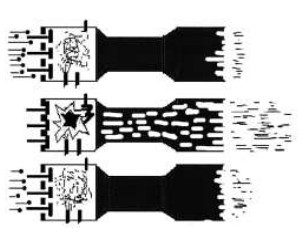