Name given to "compound" engines, that is, they have combined different mechanisms to reach an improved aim.

-We have seen this in the case of Curtiss-Wright Turbo-Compounds with the R-3350 engine base, double row radials.

-It has three turbines that take advantage of the exhaust gases' kinetic energy to increase the total power of the engine when driving the crankshaft. 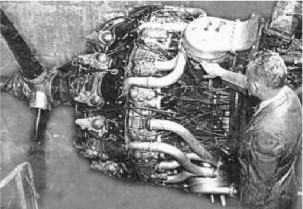 "Pointing at the three Turbo-Compound turbines"

The Napier Nomad engine can also be considered compound. 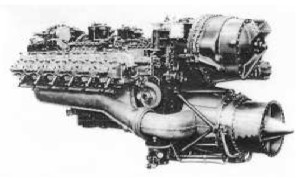 -Some turbines collect energy from the exhaust gases that are used to drive the supercharger compressor and power is also added to the output power shaft. As we can see in the following diagram. 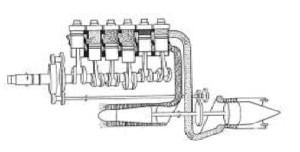 -Actually the Nomad is a Diesel engine with horizontally opposed cylinders although in the diagram it is presented with vertical cylinders for clarity.

-We see that the turbocharger has a gear output and a transmission that supplies mechanical energy towards the propeller.

-As it is a diesel engine it is required that the air enters the cylinders with enough force to fill them and also facilitate the sweep.

-That is why it seems that at low revolutions it acts in the opposite direction, behaving as a simple mechanical supercharger.

-It is presumed that from a certain regime the process begins to invert and the turbocharger is the one that provides sufficient energy for the cylinders and the power output shaft for the propeller. 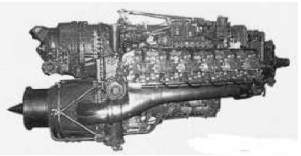 -These engines were already in the limit of the search for greater powers with piston engines because the simplest turbines of that moment surpassed them.

-What is strange is that decades later we will continue to think about its application. Although the explanation may be that for private use turbines are expensive and in the market there are ways to experiment with new devices.

-Thus we have the following test already done in a Grob airplane in Germany, towards 1995-1996.

-This is the combination of a Teledyne Continental TSIOL-550 piston engine with gear, turbocharger and intercooler to which has been added a Pratt & Whitney PW127 turbine and compressor group but without combustion chambers as it takes advantage of the exhaust from the Continental piston engine.

-The power of the engine increases to 400 hp with capacity to maintain it at high altitude. In addition the exhaust gases produce a 12% of thrust as being directed backwards.

-On the Grob Strato 2C the engine is installed with a push propeller, instead of a pull propeller. 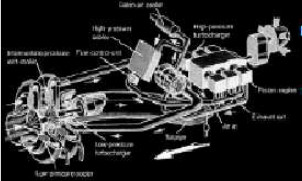