We are looking at the different systems to propel vehicles used in aviation and in astronautics as well, from internal or external combustion piston engines, to derived systems such as Pulsejets, Ramjets, Rockets, etc.

-The driving group that moves these vehicles are called "powerplants" that include all the necessary means for this.

-We have seen brands and models. There are more or less known projects in other media since some are unfeasible with current techniques. Others are theoretically being studied and tested.

-We saw the Orion propulsion system by controlled nuclear explosions and the Mini-Mag Orion system that is already tested with good results.

-The Dedalos motor proposed by the UK is less powerful and with fewer risks. It is usable in outer space.

-In general, three systems are known now, of which some are already discussed here.

-The "Electrostatic" that launches accelerated particles of cesium or mercury atoms (ions).

-It gives minimal thrust (in mN) but sufficient to stabilize and maintain geosynchronous satellite orbits. 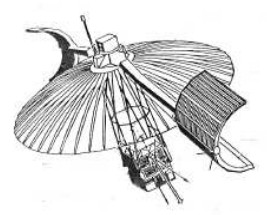 -The "Electrothermal" motors, or "arcjets" (also "resistojets") launch a jet of fluid heated by an electric arc.

-The fluid can be nitrogen, hydrazines or ammonia. These motors are used to maintain orbits.

-The propellant can be Teflon accelerated by heating and in the form of fluoropolymer gas. They have also been tested with argon and ammonia.

-The Russians have tested xenon as a propellant.

-In the Lockheed chapter we saw a propulsion system. Here we expand the detail. Running with "arcjet". 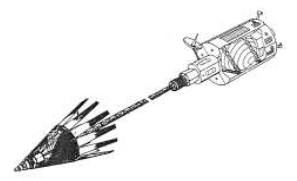 -Away from the satellite module is the reactor that will produce the necessary electrical energy.

-An umbrella-shaped screen will protect the service module.

-Another form of impulse would be a kind of "ramjet" but instead of taking in air, it would collect solitary protons from space to fuse them in a nuclear reactor and create a rocket.

-It's a simple theory known as Bussard's form of interstellar propulsion.

-In memory, ships with large sails have been designed that would take advantage of the "solar wind" to navigate through space.

From Appendix 7: In the main text, dealing with the subject of propulsion, the laser system is mentioned.

-Here we can specify the subject a little more with the information coming from the AFRL or Air Force Researh Laboratory and NASA about the studies that are being done with small miniatures of little more than 10 cm in diameter -of future spacecraft- that are pushed by a laser beam. 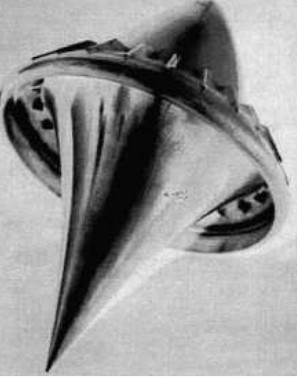 -The laser is emitted by a kind of cannon from the ground.

-The laser is pulsating 10 Kw and the type that uses carbon dioxide.

-To the Author, the principle of operation reminds him of an existing tradition in the Cathedral of Barcelona, ​​which takes place every year at Corpus Christie since 1637. It is called "L'ou com balla" or the "Egg that dances" consistent in an egg that dances at the top of the jet of an ornamental fountain.

-The principle has been studied and due to the shape of the egg with the jet pushing from below, the egg is centered and keeps fluctuating according to the instability of the jet.

-If it falls into the base, it will rise again. Some say that it is based on Bernouilli's theorem. 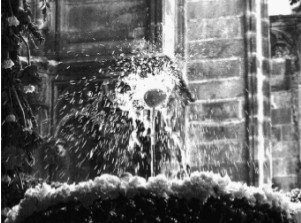 "The egg in the Cathedral of Barcelona"

-The theories about its possibilities are very varied from its ability to reach speeds of Mach 5 to that of reaching Mars in a month and a half. 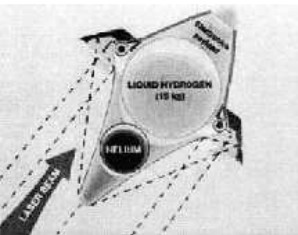 “Cross-section of the ship” (PiP)

-The nitrogen in the inner tank is used for the launch phase to rotate the navette at about 6000 rpm on itself and center its path. The advantage that its defenders mention the most is the low cost of the launch.