They are called "burners to generate hot air" for balloons that work with this system.

-Aerostats may also be considered aircraft. In fact, they were the first to rise from the ground, constructed by humans, long before the Wright brothers' machine, which was almost always believed to be the first. The Wright brothers made the first controlled mechanical flight.

-The first lifts were made with the fire at the floor. Soon the fire was placed at the base of the balloon.

-For the author of "Aerospace Engines, A-Z", the burners that are used in modern blimps are just as engines of any aerodyne. It is suitable to drive it with the use of another medium, different to that of helicopters, for example. In fact they are their engines. 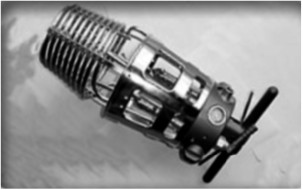 -In view that this is a genuine "engine" for a job in vertical direction, the author of this book has decided to introduce it as an example of a type of engine in a generic chapter called "Burners". As they are instituted, varying shapes and sizes, only the Ultramagic will be put as an example of modern equipment. And the one of Godard et Feuilloud, as a balloon from the pioneering days.