Brand of a starter system by firing a gas generating cartridge which sends the gas to a piston running along a spiral grooved shaft, which forces a rotation thereof and engages the crankshaft initiating the starting process. 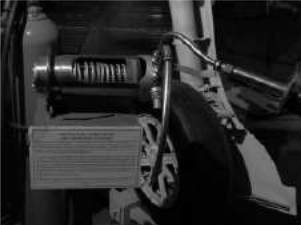 -The spring that we see causes the piston to return to its initial position.

-A duct leads the gases from a chamber that is accessible by the pilot, being able to load it as many times as necessary.

-Used only in military aircraft in the 1940s and 1950s, both in piston engines and turbines. Its low weight could be translated into greater capacity of payload, fuel or armament.

-They were manufactured under license by Breeze and Eclipse in the USA.