Exceptional propulsion system proposed by Professor Kirsten based on a rotor with long multiple blades that, when turning, create lift in the upper part and thrust in the lower part (the latter in the style of paddle wheel ships). 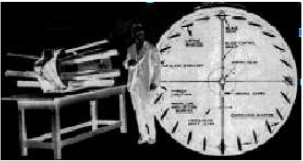 “Prof. Kirsten and his project” (PiP)

-This information has been located in Aerofiles but is commented here because of its interest as a propulsive system. Likewise the following image in which, apparently, real tests of the rotor were made.

-This test uses a Wright 400 HP aviation engine. In fact it is considered a propeller baptized as "Cycloidal". See Regnard too.