Acronyms of small engines that are installed in a generally attached way to assist take off on heavily loaded airplanes, on short or elevated runways.

-RATO means “Rocket Assisted Take-Off”. Both are the same.

-In the USA, the leader in the manufacture of these engines has been Aerojet and in Germany, for example, in the Second World War they were Walter and Schmidding (see also). 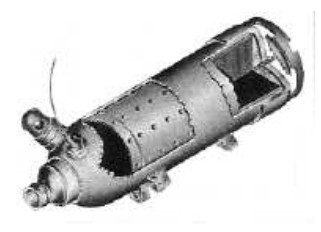 "Schematic cutaway of a JATO"

-The rocket engines for take-off, also called "boosters" were reusable.

-After having consumed the solid fuel they could be dropped and recovered by a ground team. They were cleaned and reloaded.

-In the picture above we see the engine as a capsule or bottle with fixings.

-It has an outlet for combustion gases in the rear central part, on the left in the picture.

-In this part the combustion is initiated by an electrical device -see the conductor cable- and next to it a safety valve in case of obstruction of the outlet nozzle.

-The solid load that was first used in the US in spring 1942 by the Technical Institute of California was a mixture of potassium perchlorate as oxidizer, and asphalt and lubricating oil as fuels.

-All in a homogeneous mixture that would form the engine load.

-Later the Aerojet would use several types of fuel, with smoke, without smoke, etc. 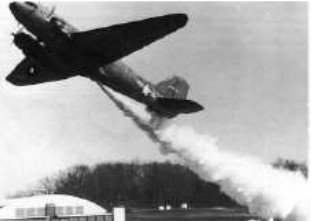 “During WWII and after” 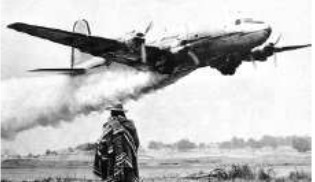 “Taking off from La Paz, Bolivia”

“Taking off from Mexico City airport”

-Below a curious photograph in which a Convair 240 takes off with a stopped engine and its propellers set flag simulating an emergency, assisted by a Jato under the fuselage.

Note: Up to this point in the extension is an excerpt from an article in Airliners by Ed Davis.

-Now, as a curiosity, the take-off of a B-47 with installation of Jato clusters on the fuselage and with its J-47 leaving a smoke trail due to water injection.

-In the 1950s and 60s there were no Environmental Regulations and civilian aircraft like the B-707, DC-8 or the Convair Astrojets (CV-990) also left - on take-off - those dense smoke trails from their turbines and as we can see the B-47 did the same with the Jatos. 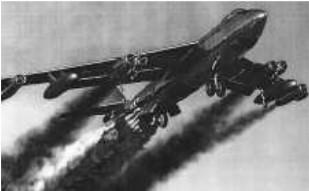 “Boeing B-47 assisted by Jatos” 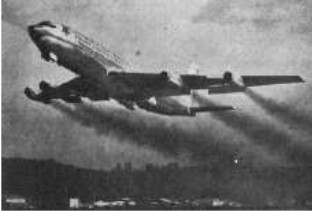 “B-707 taking off polluting -without Jatos-” 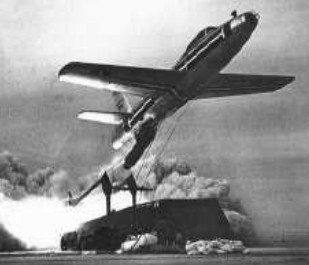 “A Thunderjet taking off from a fixed point”

-These take-offs are carried out with the help of “Boosters” that, although they can be considered JATOS, they are more powerful.