-Propulsion system that was developed to compensate for the lack of performance of the rocket engines at high or low heights.

-They started around the 1960's and they still continue today.

-The Rocketdyne RS-2200 engine, destined for the new X-33 aircraft is still being tested. It has a rectangular shape. 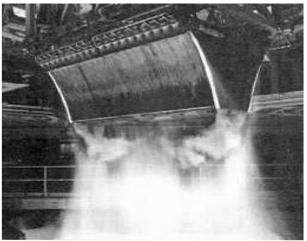 -It turns out that according to the nozzle design, a rocket engine is suitable for low altitudes. For example in the first rocket stages the nozzles need to be shorter, while at high altitudes (and in vacuum) they need to be longer.

-A good example is the Space Shuttle as each of its engines can deliver 4400 Ns / kg of specific impulse at great height and only gives 3500 at sea level.

From appendix 6: We have a new figure in which describes the different performance areas of an "Aerospike" engine.

-It is difficult to interpret the absence of a conductive outer wall of the flow.

-This is caused by the different shock waves that surround it.

-The characteristics of the components and the flow field can be interpreted below.

-There already exist projects that will be powered by Aerospike engines in order to reach very high speeds with them.

-An example is the VentureStar with six Aerospike engines. Below it is presented in an imaginative drawing. 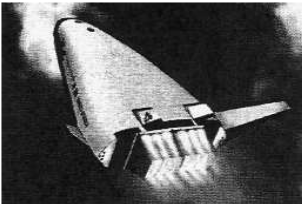 From Appendix 10: They have been made in a circular and rectangular shape, as in the case of the X-33. 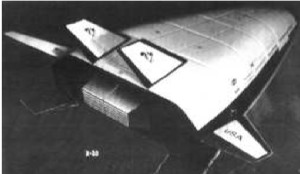 "The X-33 with a Rocketdyne Aerospike"

-Lockheed-Martin Skunk Wroks has designed the X-33, a kind of high-speed reusable spaceplane.

-They were first developed by Rocketdyne in the 1960's.

-Unlike normal bell-shaped rocket engines, the aerospike combustion occurs along knife-edge shaped surfaces to coincide both sides in a single cone. 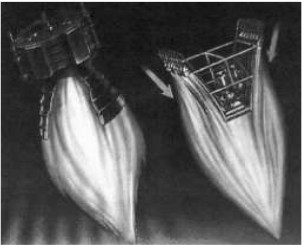 -Do not confuse Aerospikes with Scramjets.