The "Hall Effect", discovered by the American scientist Edwin Hall in 1879, has been used lately to create a sufficient type of propulsion in the vacuum to maneuver satellites and maintain their positions.

-It is studied to propel spaceships on long interplanetary voyages.

-The principle of the "Hall effect" says that: "If a current flows through a metal or semiconductor and is introduced into a magnetic field, another perpendicular electric field is created."

-In the case of ionic motors it is used to launch a plasma, creating a small enough thrust for maneuvers in space as has been the case of some French satellites (from EAS, the Smart 1 and Artemis or from Astrium the ROS motors- 99 and ROS-00). 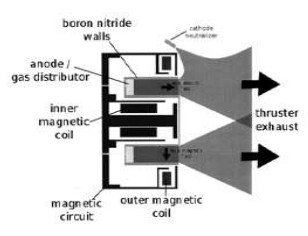 “Schematic diagram of an engine with Hall Effect”